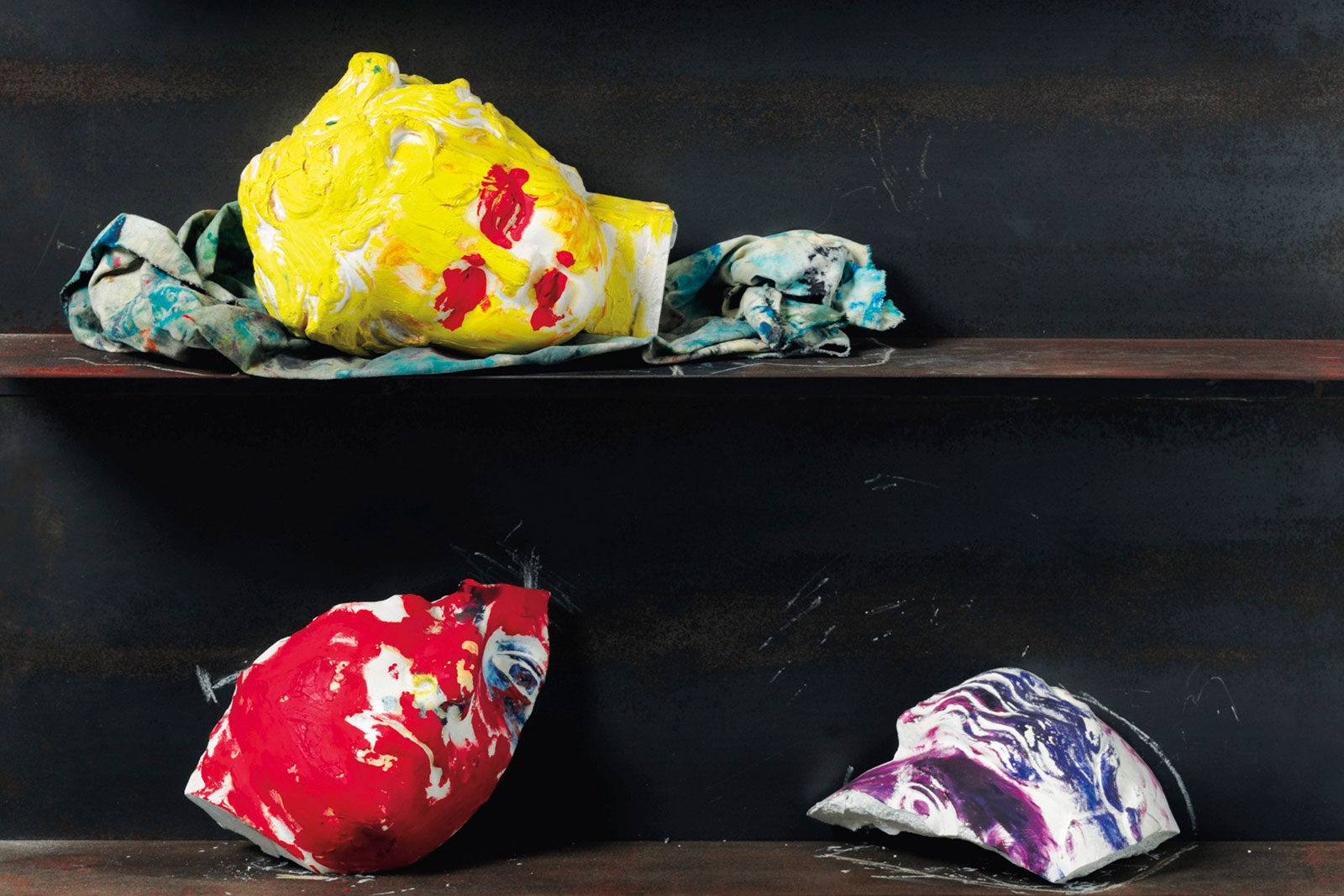 For the MIART fair, Cardi Gallery takes the viewer on a journey through some the works of the key artists of 20th century that permanently changed the art world for their way of experimenting with new techniques and out of the box artistic thinking. Artists such as, amongst others, Shimamoto, Rotella, Kounellis.

Our selection of works begins with Jannis Kounellis. As a pioneering figure of Arte Povera, Kounellis used “poor” materials – relics and fragments of Mediterranean history and everyday life – placing these objects in often startling juxtapositions, to create a new poetic context. The wall-mounted three-dimensional pieces seem to talk the language of painting rather than sculpture and within Mensola (1980), which is translated as ‘shelf’, this connection is further underlined with the use of bright paint and classical sculpture. Moreover, ancient Greek and Roman artists were known to have applied paint onto their marble gods and leaders, making it a great homage to the history of art.

Diving further into Kounellis’ art , we present “Untitled” (1995). A wall installation constructed of different layers including a metal plate, oil pastel on paper, lead and iron beam. Significant in this artwork is the base, a black abstract composition made with oil pastel on paper. The turbulent black paint and crumbled textile are violently restrained with a vertical iron beam screwed to the middle of the artwork, presenting a duality between enforced confinement and expressive independence. The works of Kounellis often suggests a form of stability in contrast to the disorder of modern society.

We expand further with Kounellis with Untitled, 1999, characteristic of the last decades of Kounellis’s career, it expresses the artist’s interest in breaking down the barrier between art and life, a defining preoccupation of Arte Povera artists. A common method to bridge art and life was through the employment of the very materials that could be taken out of mundane contexts to be re-defined in cultural environments. By combining materials that were archetypes of post-war and late 20th-century industrial society with traditional formats of depiction the artist invented startling pictorial compositions, that would define his style.

The journey continues with  Ante Litteram, 1985 is a work that invokes one of the central ideas of Giulio Paolini’s art: his belief that a work of art exists in one form or another prior to its being created. In this sculpture, the artist poses a number of questions around this idea by presenting a tower of fragments through the assemblage of a number of plaster cast fragments deriving from the famous classical sculpture known as the “Borghese Gladiator” now in the Louvre.
In Ante Litteram, the idea of the image of a single, whole, classical figure has been demonstrably split into two opposing parts. The work is comprised of an assortment of casts of the Borghese Gladiator and also of the cast of a single, anonymous hand. This is clearly separated from the others by being presented alone in the enclosed space of a glass case.

Similarly, Aula di disegno, 2005 we put on display an extraordinary example of Paolini’s contemporary reflections of spatial concepts and drawing as a primary medium that has shaped and informed art theory and its history. The four canvasses are aligned perfectly, creating the illusion of a unified surface. Presenting an intricate graphite spatial drawing that evokes the one-point perspective of a room containing multiple surfaces, its composition is interrupted in the centre of the work through the addition of the cut-out imagery of an opened book.

As a representation of  the technique of  ‘photo emulsion’, we present Mimmo Rotella’s small canvas Arabesque, 1965 which  displays a reproduction of the film poster for American comedy thriller Arabesque, directed by Stanley Donen. Rotella’s black and white appropriation centres around a typical abstract pattern of the 1960s, represented in colour in the original French poster. Featuring the two iconic actors of the time Sophia Loren and Gregory Peck, the psychedelic design draws in the viewer with a distorted one-point perspective.

L’amplesso, 1975 is an example of the use of photographic reproduction on canvas within Mimmo Rotella’s practice, a technique which he begun working with in 1963 in a quest for mechanical painting and that can be considered a natural progression – or rather, reversal, of his creative, layering processes of décollage. He still uses posters and proofs in these works, alongside magazine and newspaper cuttings as well as photographs, reaching a high degree of objectivity in forming the artist’s iconography of the present.

L’astronaute, 1966 is an example of the use of photographic reproduction on canvas within Mimmo Rotella’s practice, a technique which he begun working with in 1963 in a quest for mechanical painting and that can be considered a natural progression – or rather, reversal, of his creative, layering processes of décollage. He still uses posters and proofs in these works, which become even more objective in forming the artist’s iconography of the present. The procedure, which he calls reportage, involves choosing images, photographing them, projecting the blown-up negatives onto a canvas chemically treated with photographic emulsion to fix the image and when required, colouring.

The use of photographic reproduction is particularly effective in 8 ½, 1963 as it relies on the blueish toning of the film to recollect and render the atmosphere, somewhat suspended between dream, memory and hallucination of 8 ½ one of Federico Fellini’s masterpieces, from 1963, and one of the most iconic films of all time. Rotella’s piece reinforces the demystification of the shiny superficiality of cinema that is apparent in Fellini’s movie.

Following Mimmo Rotella, we present four Shozo Shimamoto entitled Heiwa No Akashi, 2007,  Capri-Certosa 11, 2008, Capri-Certosa 53, 2008 and Magi M, 2008. Shimamoto’s idea is to bring paint back to the material dimension, to the physicality of a chromatic element no longer perceived as a representational vehicle. The result of his technique (the ‘bottle crash’) is a true chromatic explosion. His bottle crash actions of the last decade have an unusual configuration in terms of both the relationship between event and work, and the emotional dimension connected to the action. In fact, these are representative and spectacular moments, real social acts, which include the production of paintings as their outcome. The result is generated by chance, but the gesture and its spectacularity are carefully calibrated.

We end our selection with two works part of a series by Claudio Verna of numerous acrylic paintings characterised by a conscious exploration of painting with a focus on the medium’s constructive elements including space, form, paint and colour as means to materialise a new dimension. Pittura, 1968 and Contromare, 1969.